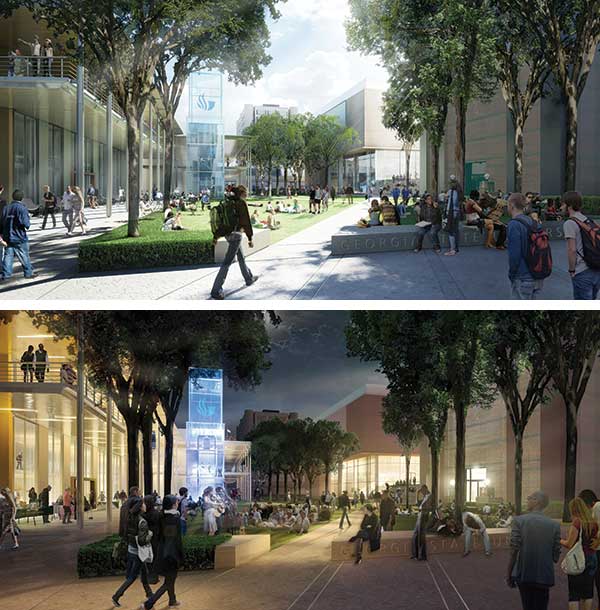 Day and night illustrations of the proposed greenway entry from Peachtree Center Avenue show a landscaped courtyard where Kell Hall will have once stood. The landscaping calls for the construction of porches along the back of the Arts and Humanities Building and Sparks Hall.

Like most Georgia State alums, Jerry Rackliffe considers Kell Hall with a mix of affection and consternation. “It’s the only place where you’d find a room numbered in the 100s next to one in the 300s,” he says of the parking garage-turned-classroom building. “You’d walk up and down the ramps trying to figure it out; that building made no sense.”

However, unlike other Georgia State grads, Rackliffe (B.A. ‘83, MBA ‘88, J.D. ‘05) built a career working at the university while earning his degrees. Today, as senior vice president for finance and administration, his job involves masterminding budgets and logistics as Georgia State continues to expand and update its campus. Building on work already done over the past decades under the direction of former President Carl V. Patton, the development is accelerating following the 2012 finalization of a new campus master plan under current President Mark Becker.

And for the coming five years, a key priority of the master plan is creating a greenway to connect Woodruff Park to the courtyard at the Parker H. Petit Science Center. This central green space will weave through campus, tracing a path that includes the land where Kell Hall now stands. Simply put: for the greenway to become a reality, Kell Hall will have to be demolished.

At first that demolition sounds almost like sacrilege. Kell has been an important symbol for the Georgia State community: the 80-year-old former parking deck’s 1946 re-configuration into the university’s first permanent building speaks to a scrappy ability to thrive in an urban setting and creatively repurpose downtown real estate. The university’s yearbook, “The Rampway,” is named in honor of Kell’s quirky corridors. But as Georgia State’s leadership team pored over plans for adding classroom, laboratory, and dorm space — while preparing for an eventual student population of 40,000 — connecting the university’s facilities through a signature campus green space proved to be a logical next step in Georgia State’s evolution.

An Ode to Kell

“Her face is not pretty, she has rampways for stairs, and her classrooms are made of odds and ends from war surplus materials, but she can hold her head high, for she has served a great purpose: she has played a part in educating leaders of tomorrow.”

Those words, written by the staff of The Rampway of the Atlanta Division, the University of Georgia — as Georgia State was known — back in the 1950s, still ring true today as the countdown to Kell Hall’s demolition begins.

For Stephanie Young (B.S. ‘91), business manager in the Department of Chemistry, bidding adieu to Kell is bittersweet.

“I started at Georgia State in 1984 and took all of my chemistry, biology, physics, geology, etcetera in Kell,” she says. “I’ll miss the old girl … the smell, the history, the feeling … walking past the cadaver labs on the 7th floor.”

Young, who has been with the department since 1992, (“I practically lived in Kell for 23 years!”) says she applauded the president’s announcement the old building will be replaced with a lawn. “I understand the time has probably come to put the old dog down,” she says.

“The green space concept is great, but I do hope some sort of monument or memorial to ‘Hell’ Hall, possibly built from some of the existing materials, will be erected,” Young says. “Kell is the original building, the old mother, and hopefully will be remembered long after she is put to rest.” 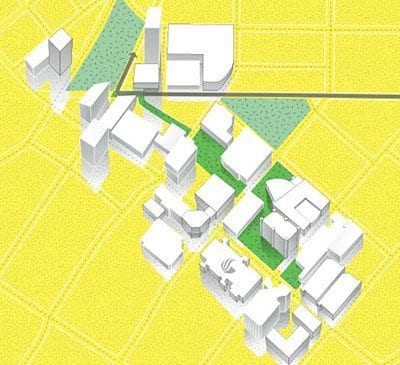 A Sense of Place

As Georgia State grows in enrollment and as a leading research university, its new campus master plan addresses the need for a greener campus landscape, improved student life facilities and high quality classrooms and laboratories.

• The plan creates three distinct districts: the Campus Core District — the traditional heart of campus consisting of two city blocks bounded by Peachtree Center Avenue, Gilmer Street, Piedmont Avenue, and Decatur Street; the Woodruff Park District — university facilities within one or two blocks of Woodruff Park; and the Piedmont Corridor District — residential facilities along Piedmont Street as well as an area east of the I-75/85 connector which the university acquired for intramural playfields.

• The greenway will create outdoor study and social spaces. It is envisioned as a necklace of landscaped quadrangles and courtyards within the campus core with links to the surrounding frame of streets and public open spaces.

• The planned opening of the Atlanta Streetcar next year will improve mobility and the pedestrian experience on campus and lead to further efforts to revitalize downtown.

Rackliffe may harbor a sentimental attachment to Kell — after all he took Physics 101, 102, and 103 in the building — but he’s even more passionate about the greenway project. “This creates an environment that supports student achievement, and that is what we are all onboard with,” he says. The impetus for creating the new greenway is not just about look and feel or creating a faster way to walk between points A and B. Numerous research studies have shown that a connected and welcoming physical space leads to a better student experience — and ultimately to better academic outcomes

“For the first time in its history, Georgia State is going to have a feel like a university campus,” says President Becker, who announced the greenway during his “State of the University” address in October. “There is a campus, but what’s happened is that we’ve been able to build and adapt building as we’ve gone along over the past 100 years, but were not able to do it in such a way that creates a welcoming and friendly campus; a place where students have the opportunity to interact.”

To facilitate that interaction, Rackliffe’s task now is to figure out how to find space for all the classrooms and facilities in Kell Hall before the demolition starts. Sitting at his desk in Dahlberg Hall, he gestures at an enormous map dotted with outlines representing Georgia State-owned or operated facilities. Moving some classrooms will be relatively easy; other facilities in Kell will be less simple to relocate. Kell has been home to some labs; those need to be in special spaces that are vented. “There’s some heavy stuff in Geosciences,” he notes, referring not to the challenging subject matter, but the literally weighty rock and mineral samples in the Geology Department.

“There are a lot of moving parts to get this done in five years,” says Rackliffe. In planning the logistics, he is getting feedback and input from everyone who teaches and works in Kell Hall. “Everyone is on board,” he says. Not only do they see the value of the greenway, they’re also eager to move to less cramped space.

And What About the Neighbors?

Creating the greenway will not only make it easier for Georgia State students, staff, and faculty to move through the campus but also will transform several blocks at the heart of downtown Atlanta. Like any major renovation project, this will have an impact on the neighbors: in the case of the university that means downtown businesses, government and nonprofit organizations, and residents. “We got the ink dry on the master plan a little less than a year ago, and the first thing we did was share that with key stakeholders,” says President Becker. “It’s tremendous to have the mayor’s support and the support of city council as well. Kwanza Hall [who represents District 2 which includes Georgia State] keeps his finger on the pulse of what is happening at the university and is extremely supportive.”

Beyond supportive, Hall is downright enthusiastic about the greenway. “It’s removing a parking garage and helping us realize our vision of a greener, cleaner downtown,” he says. “This is a great decision.”

Hall and his staff have worked closely with communities close to Georgia State, such as the Old Fourth Ward and King Historic District, on drafting development plans. “Every master plan for downtown Atlanta envisions the creation of additional parks and green space for residents and visitors to enjoy. Thanks to President Becker’s leadership, downtown is about to get a whole lot greener.”

The initiative also met a positive response from downtown Atlanta’s corporate community. “Georgia State’s enthusiasm to build a campus that provides attractive green space and pedestrian connections between its buildings and facilities is great for downtown,” says A.J. Robinson, president of Central Atlanta Progress, the business organization that works with the city and other groups on downtown revitalization.

In addition to connecting Georgia State to the businesses and government organizations in downtown Atlanta, the Greenway also will increase interaction between the University and a small — but growing — cadre of non-student downtown dwellers.

“As a resident, it’s really exciting to see the level of street activity rise with these developments, particularly at night when the area around Woodruff Park was dead for so many years,” says Darin Givens, who lives in a historic building that fronts the park. “Having more people on the street and more green space will make downtown feel safer and more livable. Put this greenway together with the surge of student population via the new One 12 Courtland housing development — bringing hundreds of new student residents here — and downtown is going to end up with more of the kind of college-town vibrancy you see in other urban campuses.”

Givens, who writes about urban development and historic preservation at the well regarded blog ATLurbanist, remarks: “I think it’s a great plan and a deceptively significant one. The activity around Kell Hall is fairly cut off from the street level with the pedestrian bridge across Decatur Street and a small courtyard that’s practically hidden from street view; it’s a setup that echoes the ‘gerbil tube’ pedestrian bridges of downtown’s John Portman towers — a 1970s aesthetic that lifted office workers and students off the streets.”

The new plan, Givens notes, “opens student activity to the streets and embraces the urban environment more completely.” He adds, “As wonderful as Georgia State has already been for downtown, this will make for an even better relationship between residents, office workers, visitors and students.”

Rebecca Burns (B.A. ‘89, M.A. ‘08) vividly recalls taking Geology 101 in Kell Hall. As features editor for The Signal in the 1980s, she put together a survival guide for incoming Georgia State students titled “Welcome to the Concrete Campus.”

The side view of the greenway shows the various additions and changes to the existing infrastructure. The master plan calls for the addition of a tier of new laboratories for the arts in the Arts and Humanities building and improved pedestrian connections between campus buildings in the campus core.

Armed with the largest grant in Georgia State history, Michael Eriksen will explore the health risks associated with the next generation of tobacco products
By Sonya Collins
The father-son, player-coach relationship between Ron and R.J. Hunter
By Ray Glier