Secrets of the Sphinx

Secrets of the Sphinx 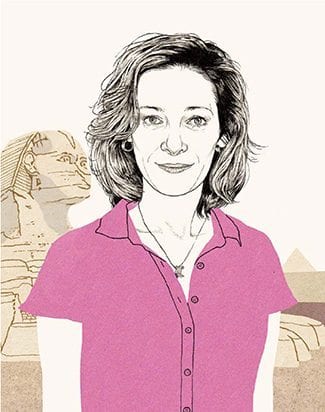 What is the Sphinx?
The Sphinx is a crouching lion with the human head and was associated with kingship in ancient Egypt. The word “Sphinx” is the Greek spelling of the ancient Egyptian word “shesep-ankh” which means “the living image” presumably, that of the king. The Great Sphinx on the Giza Plateau is carved out of the living rock and is 235 feet long by 64 feet high. That is roughly the height of the White House.

How old is it, and what do experts believe is its purpose/symbolism?
That’s a good question. The Great Sphinx on the Giza plateau was never inscribed so there are a lot of theories concerning its date, purpose and symbolism. The lion was always associated with the king; in fact, very early kings had lions attached with their burials. Lions are also guardian figures which suggests the Sphinx is guarding the royal burials on the Giza plateau. Some 1200 years later in the New Kingdom, the Sphinx becomes a figure of popular worship and is called “Horemakhet” which in Egyptian means “Horus in the Horizon”.  Some believe this later name refers to its construction under the builder of the Great Pyramid Khufu, because his pyramid complex was called the “Horizon of Khufu”. Also, the human face of the Sphinx, although pretty beaten up, resembles the face of Khufu. Others believe that the Sphinx belongs to Khafre because part of his name was preserved on a later New Kingdom stone stele erected between the lion’s paws. Either way, the Sphinx is more than 4,500 years old.

What are some of the mysteries associated with the Sphinx?
The Sphinx is always at the center of some theory or another. Some geologists think the weathering patterns of the stone indicate the Sphinx is older than currently believed. Some people believe there are mysterious passages in the Sphinx left by a 10,000 year old civilization. There are, in fact, some passages but they were carved by later treasure hunters.

What are some of the discoveries you made on the “Treasures Decoded” program?
I had a chance to follow through on a hypothesis that the Sphinx was built by Khufu. The capital of ancient Egypt, Memphis, lied to the south of Giza. If you traveled up to the Sphinx, you would approach it from the side, in profile, guarding the pyramid of Khufu which is very Egyptian since almost everything was conceived in profile. I also had a chance to examine the remains of Khufu’s quarries on the south side of the Great Pyramid and to the north of the Sphinx. It does not seem plausible that the Khufu quarrymen would leave a huge mound of unquarried rock there. Also, the causeway of Khafre swerves to avoid the Sphinx which shows it was constructed earlier … by Khufu! Still, the debate will rage on as to who was the builder of the Sphinx.