Chris Locandro's extraordinary biography has more than one title
By Lauren Montgomery (B.A. '14)

Chris Locandro figures he’s spent the lion’s share of his time at Georgia State behind a microscope. Last fall, the senior neuroscience major in the Honors College, who has a grade-point average over 4.0 and has earned President’s List honors twice, put what he learned over those long hours to work on a study that could be a breakthrough for those who suffer from epilepsy. 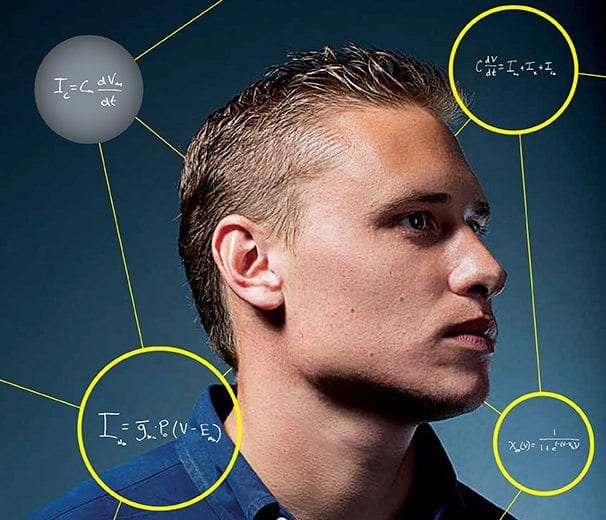 Pretty impressive, especially considering that when he’s not in pursuit of a cure, he’s the anchor for the men’s soccer team as its central defender. And he’s earned plenty of hardware for his play. In 2011, he became the first men’s soccer player in school history named to an NCAA All-Regional Team and became just the second to earn all-conference first-team honors.

Locandro said there’s no secret formula when it comes to balancing his athletic and academic focus.

“It all boils down to time management,” he said. “But once things get hectic, like in the spring when we practice two times a day and I have to prepare for an upcoming research presentation, staying efficient and minimizing distractions becomes even more important.”

For Brett Surrency, his head coach, this means he knows exactly what Locandro will give him on the pitch.

“He is just unflappable,” Surrency said. “His level of preparation is fantastic. He is one of the hardest working, most disciplined guys and that shows in his game.”

Just days after shutting down Andrew Wenger — the first pick of the 2012 Major League Soccer draft — in the Panthers’ 1-0 loss to Duke in the first round of the 2011 NCAA Tournament, Locandro started work on a research project that sought to understand how a mutation associated with epilepsy affects the electrical activity of brain cells.

“Put simply, we discovered that neurons with the mutation were much more electrically active than normal neurons,” he said.

Rob Clewley, assistant professor in the Neuroscience Institute and the Department of Mathematics and Statistics is Locandro’s primary mentor for the research.

“The ultimate goal of these studies is to understand the multi-scale processes in the brain well enough that we can improve our options for treatment,” Clewley said. “We need to better understand our existing attempts at treatment as well as find new types.”

Locandro has presented his findings at several conferences, and recently was supported by a grant to present at the Symposium for Young Neuroscientists and Professors of the Southeast at the University of South Carolina.

He’s moved on to the next step of the research, he says, which involves coming up with a drug therapy to block the hyperexcitability of neurons in hopes of preventing epileptic seizures for those with this mutation.

Locandro, who will graduate this spring, says he plans on taking a year to continue his research before applying to medical school where he hopes to specialize in either cardiology or neurology.

“The first year I came to college, I challenged myself to see if I could do extremely well on the field and extremely well in academics, and I think I’ve kind of met that challenge,” he said. “It’s satisfying to know that I’ve reached that goal and I’m going to hopefully continue to do so.”