As Alex Robson sees it, freedom is one of the most important and open-ended ideas in the world.

As a sophomore in high school, he began to explore the philosophy of freedom and what it means to others. Since 2005, through his Freedom Card project, he has mailed out and collected hundreds of three- 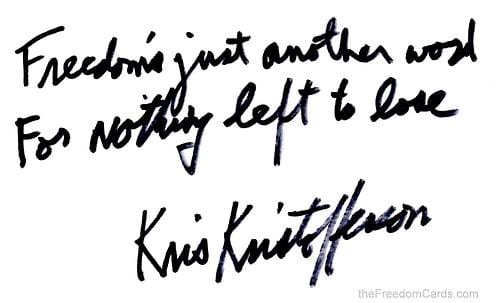 by-five index cards from politicos, movie stars, famous authors and musicians who have each scribbled his or her answer to the question: “What does freedom mean to you?”

President Clinton took a moment to personally congratulate Robson on the project, writing: “I’m glad that you’ve taken the time to study one of our country’s most fundamental concepts — freedom.”

“At the beginning we concentrated mostly on famous people,” Robson said. “Now we concentrate on individuals who aren’t so familiar, like the Tuskegee Airman, the Gold Star Mothers, men who played in the Negro Leagues and Vietnam veterans.”

Robson calls the effort “part art project, part philosophical study and part patriotic duty” and says every person can make what he or she wants out of it.

“One that has always stuck with me is from Miep Gies,” he said. “She was one of the people who helped Anne Frank and her family survive by providing food and other necessities while they were hiding from the Nazis. Her card states: ‘Freedom obliges me to secure freedom for others.’”

And when the question is posed to him?

“I’m always working on this one,” he said. “One day I’ll be able to put it into words.”