Hard as it may be to believe, Samuel Quinn doesn’t remember exactly where he was or what he was doing the day he discovered two new planets.
By Rebecca Burns (B.A. '89, M.A. '08)

Hard as it may be to believe, Samuel Quinn doesn’t remember exactly where he was or what he was doing the day he discovered two new planets. “Probably sitting at home. Maybe working on my laptop?” he hazards when asked to describe his moment of discovery. The rest of us might cling to a romantic notion of the astronomer cloistered in a cliff-top observatory — one eye squinted shut and the other glued to the end of a telescope scanning the night sky. But for today’s planet hunters like Quinn, a doctoral student in Georgia State’s Department of Physics and Astronomy, space exploration involves something a little more down to earth: sifting through data and crunching numbers. 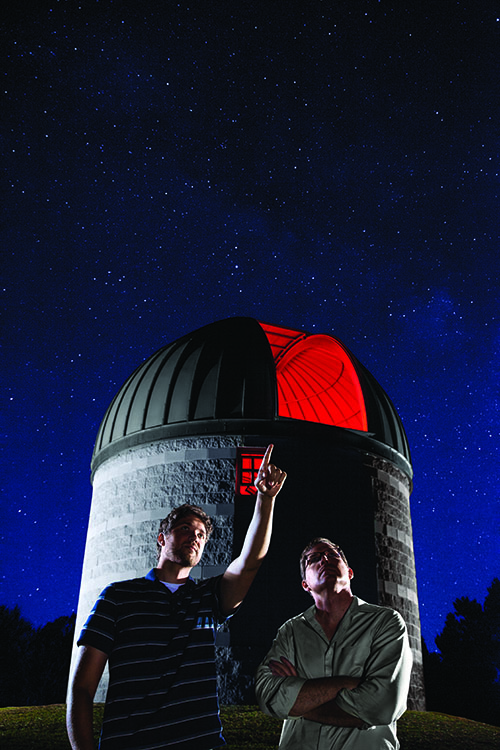 The planets in question are called Hot Jupiters. Large and gaseous, they revolve around stars in the Beehive cluster, also known as the Praesepe. The modern nickname comes from the way such a large number of stars — about a thousand — appear to move as a swarm. Visible to the naked eye, the cluster is at the center of the constellation of Cancer. Galileo recorded Praesepe in his observations. Ancient Greeks and Romans considered the swirling mass of stars a handy meteorological tool. If Praesepe wasn’t visible at night, rain was on the way.

Quinn’s research was considerably more complex than those of his predecessors. Over several weeks, a high-powered telescope at the Fred Lawrence Whipple Observatory in Arizona captured spectra showing the movement and velocity of stars in the Beehive. The spectra were sent to Quinn’s office, where he used calculations to see if certain stars exhibited “doppler-shifted radial velocities,” or, to put it scientifically, they “wobbled.” Quinn — working with his adviser, Russel White, assistant professor of astronomy — hypothesized that wobbling would indicate gravitational force exerted by a planet. If enough data were analyzed over enough time, the presence of the planets could be proven.

Deep in the bowels of Kell Hall, about as far from a West Coast peak as you can get, Quinn began his calculations.

“By the time you get four or five or six measurements, you get excited, we might be on to something here,” he says.

The data offered proof of something no one had documented before. Planets can exist in star clusters, long presumed to be too hot and crowded for planet formation. Quinn’s discovery created, well, quite the buzz.

Finding the planets was particularly important because it was the first successful discovery of planets in a star cluster. Most planet hunting has occurred around stars more like our Sun — old and solitary.

The newly discovered planets are named Pr0201b and Pr0211b. While hardly poetic, this is standard nomenclature for new planets — with the star’s number followed by a “b.”

“We’d probably have named them for our wives”—Larissa and Elise—if given a choice, muses Quinn.

While the planet names aren’t exciting, the mission of Quinn, White and other “planet hunters” is as exciting and futuristic as it sounds: to identify new planets, and to determine eventually if any of those might be hospitable to life forms.

Quinn is already on the hunt for new planets in new clusters. (Spoiler alert: He thinks he’s already found some.) In March he received a National Science Foundation grant that will fund his research.

Observatories can be creepy

The windows in White’s office on the sixth floor of 25 Park Place provide, if not a sweeping expanse of space, a grand view of Woodruff Park and work in progress on the Atlanta Streetcar. White was drawn to Georgia State by two loves. He was dating Elise, who lived in Atlanta, and he knew about Georgia State’s resources, in particular the university’s CHARA (Center for High Angular Resolution Astronomy) and its array of telescopes on Mount Wilson in California. Mount Wilson is the site of the world’s highest-resolution observatory, ideal for making precise measurements of celestial bodies, a key tool for White’s work in the origins of stars and planets.

In the four years since White came to Georgia State, things have worked out on both fronts. He married Elise and continued his work.

Researchers such as Quinn and White are drawn to Georgia State because of unique resources the department offers. The gem is the CHARA array. Composed of six telescopes at Mount Wilson in California, the CHARA is the largest optical/infrared interferometer in the world. The telescopes — spread over the mountain — can work together to image the surface of stars, offering a resolution that is so high it could spot a nickel from 10,000 miles away.Closer to home, the Georgia State-owned Hard Labor Creek Observatory near Rutledge, Ga., contains three telescopes. And in the heart of downtown, students in Astronomy 1010 make the trek to the Urban Life Observatory to see the stars over Atlanta.

After coming to Georgia State, he applied for and received a grant from the NASA Origins of the Solar System program.

“I had the grant and was trying to figure out how to complete the work and where to get telescope time,” he recalls.

Around then, Quinn, who’d graduated with a bachelor’s degree in astronomy and physics from Harvard University and spent a few years working for David Latham at the Harvard-Smithsonian Center for Astrophysics, which operates the Whipple observatory, was looking at graduate schools. Georgia State was recommended “because of its resources,” and the stars, so to speak, aligned when Quinn arrived in Atlanta in fall 2011.

Although Quinn did not man the telescope that captured the spectra used in his Beehive research, he had spent many nights in the Arizona observatory, which is on a ridge high on Mount Hopkins near Amado, Ariz.

“At times, I was the only person on the ridge and there were several telescopes I had to shepherd as my flock,” he recalls. “It was so quiet and so dark.”

“But also, they can be incredibly beautiful,” adds Quinn. Observatories are usually built in remote places far removed from cities and light pollution. It’s common for universities to have observatories far from their campuses.

Georgia State has been able to attract astronomers such as White and Quinn thanks to the growing resources of its physics and astronomy program. The disciplines go hand-in-hand. Most astronomers rely heavily on physics for calculations and many start out as physics majors. There are about 150 undergraduates in the department.

“Typically about a third will end with up with concentration in astronomy,” says Mike Crenshaw, department chair.

Of the 50 graduate students in the Physics and Astronomy Department, 23 are in astronomy. According to Crenshaw, the number of students earning bachelor’s degrees in physics has doubled over the past four years.

The rebranding of the Georgia State football program started like this...
By Ray Glier
How well does Tom Long (B.B.A. ’73, A.S. ’78) know pop and country music? Just ask his guitar
By Charles McNair

One of the department’s key goals is work on the “connection between extra-solar planets and their parent stars,” says Crenshaw. This work connects directly to Quinn’s discovery.

We piece the puzzle together

When your research focuses on something as vast as space, you think differently. The Beehive cluster planets are “young” planets at about 600 million years old. Obviously, to research how planets and stars form and age, one can’t study a single planet or star over time. Instead, explains White, astronomers look for other planets, aged 100 million, for example, or a billion, and see how those compare in size and motion.

To understand how planets form, you have to find them. We’re learning a lot from these first discoveries.”

Often, what’s found first is most important because it changes previously held assumptions.

“Few things excite the lay person more than the idea of distant worlds orbiting some sun out there in a totally different environment,” says White. “What would the night sky look like from that planet?”

That, at least hypothetically, can be seen in the rendering NASA created visualizing the view from the surface of one of the Hot Jupiters in the Beehive, where the sky would contain hundreds more bright close stars than the one we see.

Planet hunters are always asked: So, is there life out there?

“I think that we know now there are so many planets, they are so common, it would be a surprise to me if we are alone,” says Quinn. “Small rocky planets like ours are common.”

Adds White: “We can say there are earthlike planets, a certain distance from stars, where water could exist. What we don’t know is what gets life started. There can be perfect conditions, but life doesn’t necessarily spontaneously come into existence.”

That question, he suggests, is really one for biologists.

And what’s the most common thing laypeople say when they meet an astronomer?

“They always say, ‘Oh, I read my horoscope every day,’” says White with a good-hearted grimace. In case you’re curious, he’s a Cancer. Quinn is a Libra.