Georgia State researchers have discovered that opaline gunks up a lobster’s antennules, reducing its sense of smell and allowing the sea hare to escape unharmed.
Ann Claycombe 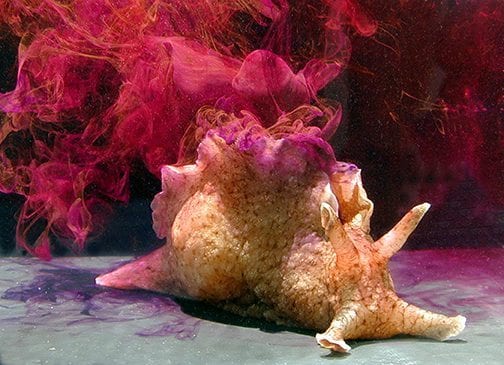 Imagine a bloodhound trying to hunt wearing nose plugs. That’s how the spiny lobster feels after being squirted by a substance called opaline by the sea hare, its natural prey. Georgia State researchers have discovered that opaline gunks up a lobster’s antennules, reducing its sense of smell and allowing the sea hare to escape unharmed.

Sea hares also squirt ink, which contains chemical that are noxious to lobsters. Charles Derby, the Regents’ Professor of Neurology and Biology, along with graduate students Tiffany Love-Chezem and Juan Aggio, was the first to figure out exactly how opaline works.

Both sets of neurons showed only a muted response, showing that the smell of the shrimp juice simply wasn’t getting through. The team tried the experiment again, painting the antennules with some of the non-sticky components of opaline. This time, the lobsters and their neurons responded strongly to the shrimp juice, showing that stickiness was the key to opaline’s powers

A computer scientist and his star pupil brew beer with the push of a button.
By William Inman
Ten years ago, Georgia State’s graduation rate stood at a paltry 32 percent. Today, it’s up to 51 percent and climbing thanks to a handful of successful initiatives implemented by Vice Provost and Chief Enrollment Officer Timothy Renick.
Associate Professor of Music Stuart Gerber discusses his performance on a custom-built nine-foot door.
Design students tap into Georgia State Centennial to help rebrand an architectural icon
Load more