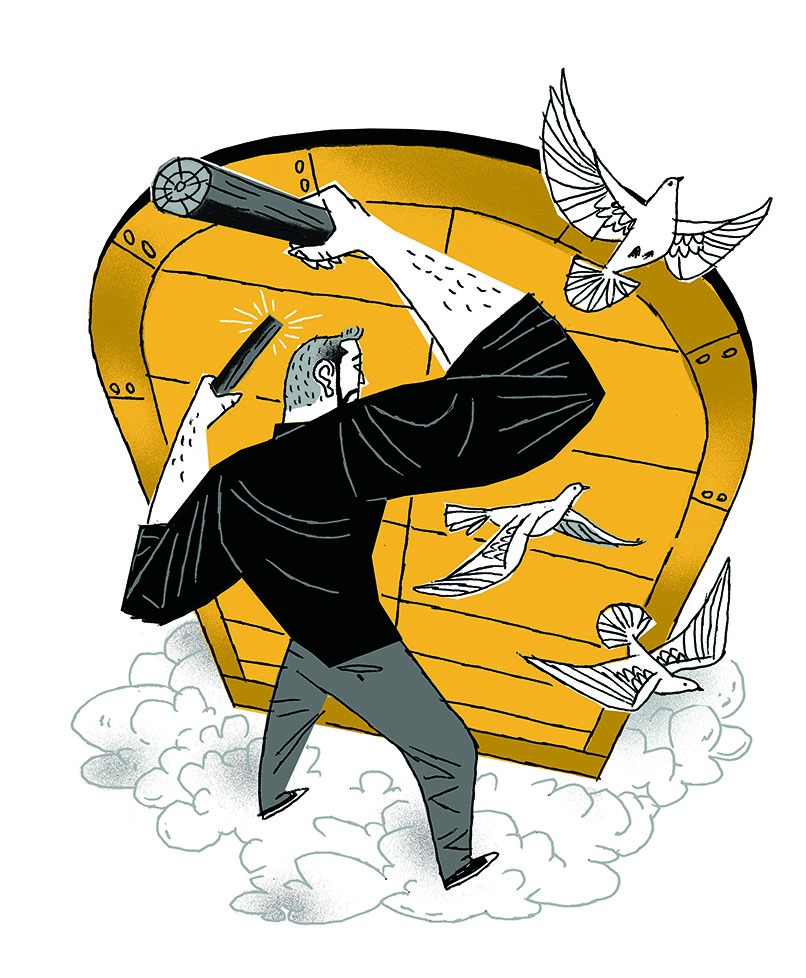 Exactly what is Heaven’s Door?

It’s actually a piece of music and an instrument. Karlheinz Stockhausen wrote the score to Heaven’s Door in 2006.

What was the motivation behind building the door?

Stockhausen prescribed that the piece Heaven’s Door be played on a large wooden door. At first he thought of using an old church door, perhaps building a frame for it so it could stand by itself, but after some experimentation with old church doors he decided that, since they were not made for music, they did not sound nice enough. So he decided to design a door that would be built specifically for this piece of music. Stockhausen had the first door made in Germany in 2006. The door I had built was made locally by D.J. Betsill, a luthier in Stone Mountain, Ga.

How tall is it, how much does it weigh and where do you keep it?

It is about 9-feet, 2-inches tall, and  6-feet wide and weighs around 650 pounds when fully assembled although this is an approximation based on weighing the individual parts. I keep it partially assembled in the Georgia State percussion studio in the basement of the Rialto Theatre. It’s too tall to keep full assembled, our ceilings down there are only 9 feet tall; something we didn’t take into consideration when building the instrument. We’re only two inches off!

How long did it take to build?

About six months. We received very scant plans from the German cabinet maker who made the first door, and basically we had to reverse engineer the entire thing. D.J. made many improvements to the first door. So it took a lot of experimentation, but it is a beautiful piece of woodworking.

How do you “play” the door?

I had two large wooden beaters made, also by D.J. Betsill, to strike the large sound panels on the leaves of the door. I hit the door with the beaters but I also scrape the door, stomp my feet on the resonant platform directly in front of the door and I also kick the door a couple of times. I also jump up to play the panels located at the top of the instrument, and fall the ground and play the lower boards while laying on my side. It’s actually quite a workout to perform.

Does the door open during performances?

Hopefully, if I perform the piece correctly! I hate to give it away, but yes, the door does open after about 22 minutes of beating the hell out of it. Stockhausen writes for different moods and ideas to be performed. Every page of the score has a different mood or character. For example, it begins with very sparse and he describes it as “normal” strokes, then as the piece gets more active, and the performer is getting more frustrated that the door is not budging, there’s “impudent,” “explaining,” and, towards the end, “angry.” Then, as the door opens, there is blinding white light behind and the percussionist walks through the door. On stage, behind a curtain and unseen to the audience, there are a number of cymbals and tam tams that the performer begins to play very loudly creating quite a cacophony. After a couple minutes of this, a loud air raid siren goes off in the hall. And after another two or three minutes, a little girl, about 7 or 8, stands up from her seat in the audience and walks on stage. She looks at the door curiously, as this cacophony is still going, and she walks through the door into the light and the piece ends. The entire work is just shy of 30 minutes.

Is there anything like the door, musically, or otherwise?

No, not to my knowledge. And as far as I know I’m still the only person in the world to perform this unique piece. I’ve played it nearly 30 times.

A computer scientist and his star pupil brew beer with the push of a button.
By William Inman
Ten years ago, Georgia State’s graduation rate stood at a paltry 32 percent. Today, it’s up to 51 percent and climbing thanks to a handful of successful initiatives implemented by Vice Provost and Chief Enrollment Officer Timothy Renick.
Georgia State researchers have discovered that opaline gunks up a lobster’s antennules, reducing its sense of smell and allowing the sea hare to escape unharmed.
Ann Claycombe
Design students tap into Georgia State Centennial to help rebrand an architectural icon
Three Georgia State newcomers bring home the hardware
‘Congratulations’ are in order for Mike Brune and funny filmmakers Fake Wood Wallpaper.
By Lauren Montgomery (B.A. '14)
“The whole point of life is to overcome and transcend limitations,” Tejeda remembers thinking. “That’s when my story in the United States began.”
By Jason Langbehn (M.P.A. '12)
Sucheta Rawal and Go Eat Give connect people, places and palates
By Doug Gillett
Although Cleon Arrington died three years ago at the age of 72, the mission lives on in the Dr. Cleon C. Arrington Scholarship in the Sciences.
By Doug Gillett
Professor Jennifer McCoy helped keep the peace in Hugo Chávez’s Venezuela. Then she was run out of the country.
By Susan Finch (B.A. '99)
Load more