Tom Long’s old FG-180 red label Yamaha could be a country music song — one of that tells a good story, brings a lump to your throat.

The guitar has laid around and played around a lot of towns, a lot of honky tonks. It carries old scars, 204 to be exact — the scratched autographs of musicians Long knew and helped and loved in a country and pop music business career spanning five decades.

“My guitar gave me much comfort over the years, whether just peace of mind when I played it, or while watching someone famous make their mark in the maple-wood grain,”

In 1979, a fresh-faced graduate of the commercial music program at Georgia State University fortified with a business management degree bounded into the recording studios at Master Sound on Spring Street in downtown Atlanta. Tom Long’s internship had begun. Isaac Hayes, a huge star of the time (“Theme from Shaft”), sat at the studio grand piano working on a new album. Long found enough courage to approach Hayes — it took a couple of days — then brought out his guitar. He asked Hayes to sign it.

“The only pen around was a regular fountain pen, so that’s what he used,” Long recalls. “He scratched his name into the grain. Everyone from that point on would do the same.”

The Yamaha’s story had begun.

A Long way to the top 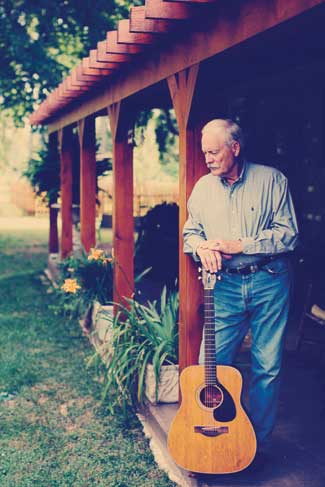 Long worked two years at Master Sound, then jumped to Bill Lowery Music Publishing, also in Atlanta. (Beginning in the 1950s, Lowery rose to be the nation’s top disc jockey, a TV pioneer and a music entrepreneur credited with the discovery of Ray Stevens and Jerry Reed.) While at Lowery, Long cofounded the Atlanta Songwriter’s Association (ASA). Both involvements put him in contact with stars and rising stars.

Joe South (“Games People Play”) scratched his name onto the Yamaha. Lowery introduced Long to other musical friends — Tommy Roe (“Dizzy”), Billy Joe Royal (“Down in the Boondocks”) and others. Each etched Long’s guitar.

In December 1980, Long climbed on with Tree Publishing, a Nashville powerhouse. Long’s signee list grew longer — Harland Howard (“Heartaches by the Number”), Hank Cochran (“Make the World Go Away”) and Roger Miller (“King of the Road”).

“I first saw Buck Owens and the Buckaroos in Marietta, Ga.,” Long says, “when they sang at a Kmart store opening on Roswell Road near the Big Chicken right off Highway 41. I will never forget that day. The Beatles were red hot then, and Kmart had a flatbed trailer set up right in front of the main doors. A huge crowd had gathered and when the doors opened, the Buckaroos came out dressed like the Beatles, hair and all. They kicked off the show with “I Want To Hold Your Hand” and the crowd went wild. Then they pulled off their mop-hair wigs and struck up “I’ve Got A Tiger By the Tail.”

Years later Long met Buck Owens at Tree Publishing. It happened to be the day Owens sold his song catalog to the house for $2 million. Long reminded the star about that flatbed at a Kmart, and they shared a big laugh.

“Then Buck signed my guitar with the same pen he just made $2 million with,” Long says.

That Kennesaw area holds a Long family history. At the Battle of Kennesaw Mountain, Yankee soldiers got the drop on Long’s Confederate great-grandfather. The unlucky man was preoccupied with cooking a chicken at the time. The Yankees took him prisoner, Long says, and “marched him all the way up north.”

Outside Jasper in Pickens County, Long’s grandfather earned a six-month vacation from society for “shooting the pipe out of a revenuer’s mouth,” Long says. The agent busted the marksman for illegal activities involving fermentation.

Long discovered he had gifts as a student and athlete. A senior at North Cobb High School (class of ’63), he earned the Atlanta Journal-Constitution’s Most Outstanding Senior Award, recognizing achievement in scholastic performance, involvement with prep organizations and athletic excellence. In football, Long played both ways on the line and punted, and in track he competed in the 440 and broad jump.

Long’s dad held steady work as a precision welder at Lockheed in nearby Marietta. (A welder’s shop still stands out back, behind the Kennesaw home.) Long learned chords on guitar from his dad, who played piano and mandolin. Long’s mom, meantime, held down the fort. She still does today, at age 88.

After high school, Long enrolled at the University of Georgia extension, but felt burned out and dropped one of his classes.

The rebranding of the Georgia State football program started like this...
By Ray Glier
Hard as it may be to believe, Samuel Quinn doesn’t remember exactly where he was or what he was doing the day he discovered two new planets.
By Rebecca Burns (B.A. '89, M.A. '08)

A week later, a draft notice arrived from Uncle Sam. This was 1966, the height of the Vietnam War.

Guys like Long — country boys, unconnected to power, empty pockets — went to Vietnam. He maintained Huey helicopters there, the workhouse vehicles of the Asian conflict.

It was easy to get killed in those strange times, but Long played an ace in the hole.

“I had a three-piece band that got me out of the jungle on weekends to play enlisted men’s clubs and officers clubs throughout Vietnam,” Long says. “Within the Huey helicopter outfit, I was able to make friends with high-ranking officers who really liked our music and agreed to fly the band to various parts of the country to perform.”

Long played guitar and sang lead. The band’s showstopper? “Counting Flowers on the Wall,” a Statler Brothers novelty tune. The GIs ate it up.

A lot of bugs bit Long in Vietnam. The music bug bit him hardest.

It changed his life. 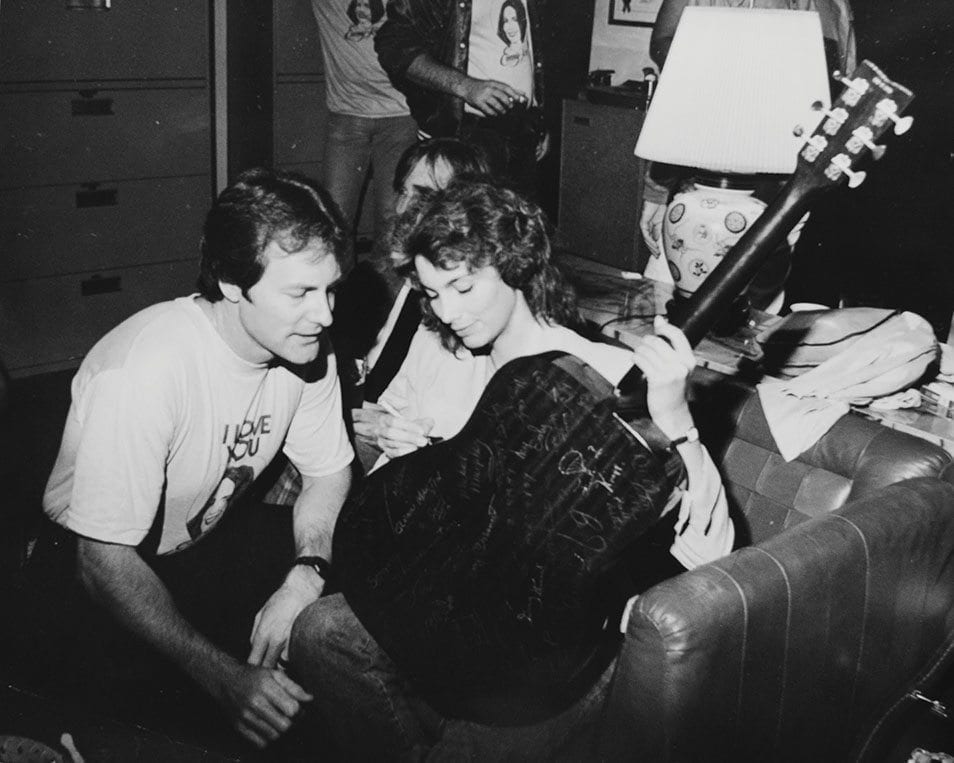 The autographs on the old Yamaha accumulated: Emmylou Harris (“Wrecking Ball”) and Dolly Parton (“I Will Always Love You”) and Curly Putnam (”Green Green Grass of Home”), among many.

In 1983, Long became president of the Nashville Songwriters Association International. The position put him in front of microphones and TV cameras at high-profile country music events across the nation. He came to the attention of the president of ASCAP, the American Society of Composers, Authors and Publishers. Hal David, lyricist to Burt Bacharach on a string of ‘60s and ‘70s pop hits, brought Long aboard as membership vice president of Nashville’s ASCAP office for the next 10 years.

“Alan didn’t have much hair early on in his career,” Long says. “After our new ASCAP building was completed, we had a party for him. The building was packed with Music Row folks.

“Alan and Denise, his wife, walked in. Alan sort of bowed, took off his cowboy hat and showed off his new transplanted blonde locks. Everyone cheered and clapped. Some folks don’t realize today that early on Alan Jackson was thin on the head.”

One Yamaha story leads to another:

In 1993, Long acquired an eager young intern from Belmont College. The kid sat in on staff meetings and helped out with busy work, earning school credits in Belmont’s commercial music program.

“One day, the young man was in my office. I asked if he played an instrument, sang, or wrote songs. He said, ‘Yes, all of the above,’” Long remembers.

“Well, my old Yamaha was on the guitar stand next to my desk, and I asked him to play me something. He said, ‘No, that’s not what I’m here for,’ which made me reply, Pick up the guitar and play me a song!

(The reluctant intern would later write a book, “Diary of a Player,” and claim that Long told him to “play the damn song or you’re fired.”)

The intern played a song.

Long’s jaw dropped. He called in another ASCAP rep to listen. Soon the whole staff crowded the room.

It’s how Brad Paisley first came to the attention of Nashville powers-that-be. The dominoes fell. Paisley became a superstar.

Thanks for going out on a limb for me. I really appreciate all you’ve done and the amount of certainty you have in my talents. Without your persistence and prodding, no one would even know that I play! I truly appreciate it.

Before he left his internship, the future superstar identified and catalogued all 204 names scratched into the varnish of the Yamaha.

A man at home

Tom playing his old FG-180 at his home in Kennesaw

Long approaches 70 in a role more important to him than music executive.

He capped his career in style, working for the publishing company of Anne Murray, the Canadian superstar, then as catalog manager for SonyATV Music Publishing. He co-produced albums by The Kentucky Headhunters and Pat Boone, then settled down in Franklin, Tenn.

His youngest grandson, Mason, and his mom, came under the care of Long and his wife, Belinda, following a couple of family misfortunes. Mason was five weeks old. Long now reads to the youngster every night. From the front porch of their home, visitors see signs of vibrant childhood life everywhere, a tree house, a basketball goal, a lariat. Long loves cowboys.

“Sometimes Mason and I lasso each other in the front yard,” he admits.

Long also cares for his mom. They admire the tomato plants, protected from deer and rabbit by a picket fence. They walk a scuppernong arbor along much of the back of the 1.5-acre lot.

Belinda and Tom met five years after he returned from Vietnam. He and a buddy went to Daytona Beach for some ocean air, and they dropped by the famous Torchlight Restaurant at the Castaway Motel. Johnny Carver played his hit song “Tie a Yellow Ribbon Round the Ole Oak Tree.” Love was in the air.

“I kept seeing this beautiful petite girl,” he recalls of Belinda, who was on vacation with a friend herself. “I thought she was the cutest thing I ever laid eyes on.”

Belinda liked the handsome former GI. They met at the beach the next day. They stayed in touch until Belinda found a way to transfer her nurse work from Mobile, Ala., to Northside Hospital in Atlanta. They married and nearly 38 years along, it looks like happily ever after.

The downstairs basement has a homey quality — if home is a music museum.

Memorabilia lie and lean everywhere in Long’s version of a man-cave. His Georgia State diplomas stand out proudly among signed Willie Nelson, Doug Stone and Ricky Nelson posters and photos. Long says he first wanted to learn guitar after Ricky Nelson became a star. Before that, Nelson starred on “The Adventures of Ozzie and Harriet.” 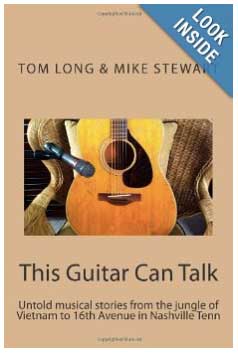 Long writes about his incredible music journey in his book, “This Guitar Can Talk.”

The Yamaha, in its way, tells all these stories.

Long says things might have been different “without the prayers of his family and the Lord’s protective hand.” At war, a mortar round in the wrong spot would definitely have changed things. Long could have visited the Torchlight Lounge on a night when no pretty girl named Belinda came in.

He also acknowledges one more bit of good fortune.

“My association as an intern at Georgia State University led directly to my work with Bill Lowery,” he says. “That was the jump spark to my whole career.”

An old red-label Yamaha — well loved, kept in tune, a monument to a life fully lived — testifies to it.